Though it shouldn’t encourage anyone to start slamming shots after taking a dab​. By Troy Farah | Feb 16 2018, 5:28pm 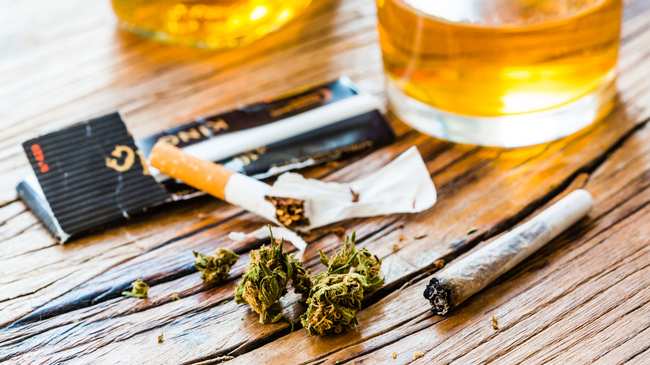 In January, the California Department of Alcoholic Beverage Control issued new rules declaring that intoxicating drinks cannot be infused with marijuana. Of course, that isn’t going to stop many people from simultaneously consuming weed and booze, especially as more states like California roll back cannabis prohibition.

These people might be interested to hear about a string of recent studies suggesting that cannabis can actually have protective benefits for the liver. Still, they should resist the urge to start slamming shots after taking a dab, or vice versa.

The largest study of the bunch found that drinkers who smoke weed had significantly lower odds of developing liver diseases including hepatitis, cirrhosis, steatosis, and even hepatocellular carcinoma, a type of liver cancer. Researchers at the National Institute of Scientific Research at the University of Quebec looked at the discharge records of nearly 320,000 patients who had a past or current history of abusive alcohol use.

“We found that if people are using cannabis in the dependent manner, they actually are much more protected from alcoholic liver disease,” Terence Bukong, a hepatologist and the study’s lead investigator, tells Tonic.

Alcohol abusers who didn’t use weed had about a 90 percent chance of developing liver disease, whereas light cannabis-using heavy drinkers had about an 8 percent chance. For dependent cannabis users who drink a lot, there was only a 1.36 percent chance. In other words, this study suggests that heavy pot use could mean a better defense against alcohol-related disease compared to light or no marijuana use.

This was a population-based correlation study, so it’s too early to draw strict conclusions. However, it’s consistent with another paper published in October, which looked at more than 8,200 patient records and found that the “lowest prevalence of [non-alcoholic fatty liver disease] was noted in current heavy users of marijuana.” (Some of the participants in this study did drink, but the data was adjusted to account for that.) They also found that cannabis users had worse diets than non-smokers—they consumed more calories, soda, and alcohol—yet they were less likely to be obese.

The researchers, led by a team at the Stanford University School of Medicine, hypothesize this might be related to the link between marijuana use and lower fasting-insulin levels, which could also protect the liver from non-alcoholic liver disease. Liver disease is frequently associated with insulin resistance and is caused when the liver accumulates too much fat, thus impairing glucose metabolism. So, cannabis may protect the liver even from dietary risks.

The anti-inflammatory properties of cannabis are well established. Your body has an endocannabinoid system, which influences memory, appetite, and immune function. The two best-known endocannabinoid receptors are CB-1 and CB-2, which are found throughout the body, including the liver, where they play an important role in the development of liver diseases. (CB-1 seems to promoteliver damage while CB-2 seems to protect against it.)

The liver also metabolizes cannabis to differing degrees depending on how it’s ingested. And the therapeutic effects of marijuana are highly dependent on the ratio of two main ingredients: tetrahydrocannabinol (THC) and cannabidiol (CBD). Researchers had no way of determining this ratio or even the strain type with the data available, so they don't know to what extent the receptors in the liver would have been activated.

“The principle is creating a balance between the CB-1 and CB-2 agonism,” Bukong says. “How do we create a balance where cannabis use is actually having a therapeutic effect against detrimental effects?...I don't have an exact mechanism for how that balance is happening.”

On the other hand, drinking has some health benefits, but only in moderation. The minute alcohol hits your bloodstream, it triggers an immune response, binding to receptors on immune cells, sparking the release of inflammatory proteins called interleukins.

Interleukins are a class of molecules called cytokines that are used in cellular signaling. In this case, they cause a cascade of inflammation when specialized white blood cells in the liver encounter toxins released by bacterial cells. Alcohol abuse makes your intestinal barrier more permeable, which allows these bacterial toxins to seep throughout the body.

“If you drink alcohol in an abusive manner, either binge drinking or chronic, excessive drinking, there is a possibility of you creating a leaky gut,” Bukong explains. “The bacteria transfers from your gut into the hepatic portal vein and then into the liver.” The liver then recognizes these pathogens and begins to produce inflammatory cytokines, he says.

The more often this happens, the more inflammation there is, which can cause a type of scarring called fibrosis. Too much scarring and you get cirrhosis, a hardening of the soft hepatic tissue, which can lead to life-threatening liver failure. Cirrhosis and hepatitis B are both leading risk factors for types of liver cancer. So you really don't want inflammation in your liver.

Cytokines can help us measure how much damage alcohol does to the gut, liver, brain, and other organs, plus they are useful biomarkers for detecting alcohol use disorders. In a studypublished in December, researchers at the University of Colorado Boulder measured interleukin levels in 66 people who drink, some of whom used marijuana. They found that those who use cannabis had less circulating cytokines, which “suggests that cannabinoids may also have the potential to reduce alcohol-related harm.”

“There've been disassociation studies—correlational studies with people who drink having greater pro-inflammatory proteins in their blood versus people that don't. And then also people who smoke [weed] who tend to have lower inflammatory levels [versus] people who don't,” Raeghan Mueller, a molecular biologist at the University of Colorado Boulder, and one of the study’s co-authors, explains. “So it's just one of those things that we just thought, ‘Okay, let's try it out and see if we see anything,’ and we did, so that was exciting.”

The University of Colorado study was a small one, but it tells us which inflammatory markers researchers should look for when researching cannabis and alcohol use. In the future, science needs to look at pot’s interaction with the liver at the cellular level. It also needs to explore the ratio of THC to CBD, which can vary significantly across different cannabis strains.

“I think that we need to go further and know exactly what is the detailed molecular mechanisms and also what are the potential side effects,” Bukong says, advising that this research should be taken with caution. “It's a bit premature to make conclusions based on just preliminary data, but we will know more in the next couple of years.”

Sign up for our newsletter to get the best of Tonic delivered to your inbox weekly.